We are now on week nine of this 90 challenge. I can't believe that it has already been 59 days and that I am going into the last 31 days of this challenge. It has been a really hard challenge for me and I have realized what I can and can't do. I am going to try and push myself a bit harder within the next 31 days to see just how much I can get done.

This week was a bit more fun than the last week. i have to say. I got to work on some cards that I wanted to get do but was too busy to put the time into. I would have had one more card to show you but my Norton Antivirus corrupted one of the cards that I was working on. Apparently that is common knowledge that Norton doesn't like Photoshop. Wish I new that. I never really had any problems with it until my computer died and then well I guess it didn't have any of the updates to avoid that problem so when the free subscription ran out Norton decided to corrupt my image.

It was sad and I was a bit upset about it, but I can't cried over corrupted files. I am just going to have to move on. So talking about moving on let's get to the cards for this week shall we. 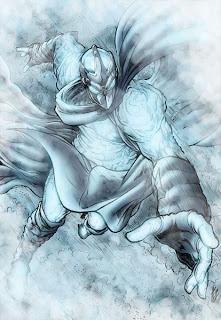 This card is called Breeze Knight. I have to say that working on Elvin Hernandez' cards always proves to be a challenge. He puts so much detail into his work that I don't really want to screw that up; I am always afraid that I am going to make it look worse than when he gave it to me. I like the way the card came out.

I tried to knock out the lines and make is as though this character is actually wind, but it didn't seem to work out in my favor so I did this instead.

This card is Dark Rose. He is one of the most relentless warriors in the Kaiser's army. This card gets stronger every time a creature that fights him goes into the Boneyard. I like this character because is seems as though he is really calm and collected but in actuality he is ruled by his emotions. 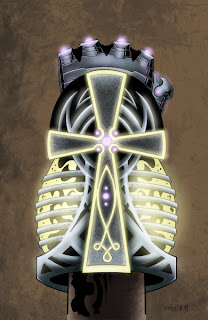 This is a relic known as the Hand of Faith. This card boosts the Hero's attack points while if combined with the Hand of Power converts all the damage that was done to by the Hero to life points for the Hero.

I think that this is going to be one of my favorite cards to play. Any time I can do damage to an opponent and then get life points for it is a win in my book. 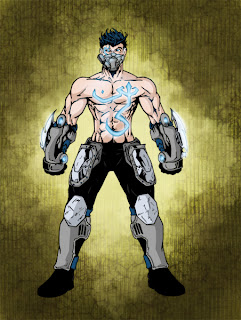 This card is known as the Pit Fighter. Nothing more that a scrapper who fights for a living. There are many of these type of fighters on the planet of Titan. The only thing they know is how to fight and fight to survive. If you were ever to come across one of these Pit Fighters you better hope that t hey are having a good day, because if they are not you will fight until one of you is no longer breathing. 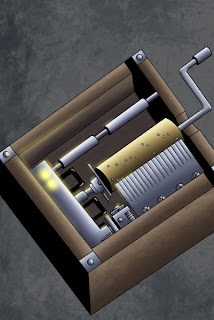 This is the last of the casting point containers. This is one of the common ones. This is known as the Music Box. This box allows you to store two casting points. I know that it isn't much but it has a low casting and skill level, so even as a new player you would be able to get this card out and store some casting points for later. 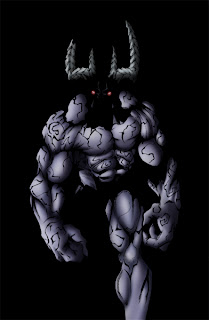 This is the Shadow Demon. This is the debut of Richard Swan. He was a student of mine at the Art Institute of Washington. Before he left you drew this picture for me to be included in the game. I went ahead and colored it up and now it is ready to go. I didn't want to over do it with the glowing so I kept it to only his eyes. I thing the subdued colors that are within this piece is helping the fact that he is a bad guy and well you better watch out. 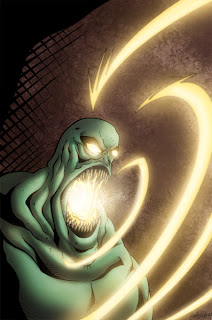 This is an enhancement card. It is known as Sonic Scream. This card allows you to add attack power to your attack every time you attack. I liked the glowing out of the mouth and eyes. The card really looks powerful. That always makes me happy. 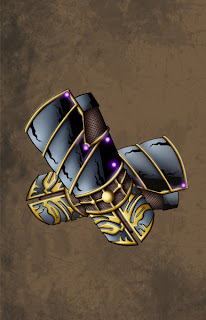 These are Vulcan's Gauntlets. At this moment I have absolutely no idea what they do. I know that i had to do them and I know that I have what they are supposed to do in my list of descriptions for each card. Sorry if you really wanted to know what this card did. You will just have to get the card and find out what it does then. Sorry.

There you have it. 8 cards instead of seven. I am trying to get those numbers up every week. Hope you liked this weeks updates. If you did please let me know and if you have any comments don't hesitate to let me know. Thanks
Kaiser