Man I have to say that for half of this challenge I haven't been able to update on time. It seems to be one of my biggest problems. I just don't get around to updating when I should. I can do the work but the whole updating thing always seems to escape me. I am going to have to take my wife up on helping me out with this kind of stuff.

Well once again only 7 cards. Like I mentioned before my computer died and well that has been making things hard for me. I was able to get my computer back this week so I have to say that it was a pretty fast turnaround from HP. They had to replace my motherboard. Hopefully that will allow me to be more productive again.

I finished my Marvel deadline which kept me up pretty late the night before it was due, but that is done now. So, I might just have a couple of extra minutes to put towards this challenge. So let's move on to some of the cards I got done this week. 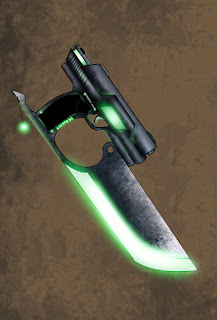 This is one of Tyoshi's weapons. That's right a ninja with a gun. There isn't anything wrong with that and if you look at ninja history they had pistols too. So there. When I was creating this weapon I was just looking at adapting the idea of a bayonet, just more hand held. I like it. 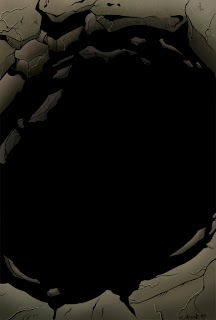 This is the Darkness card. At first I was jut going to have a black rectangle for this card but then I was told that that would be cheating and I should do something a bit more interesting. So, I made a hole... with a lot of black. 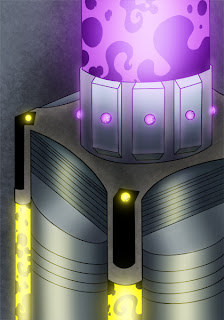 This is the Filter. The machine that creates subordinate magic and is pretty much running the the planet of Titan. This is one of The Kaiser's inventions and one of the main reasons why he believes that he should be ruler of the world. That and family linage and well the fact that he is super bad guy. At least he is to those who oppose him. 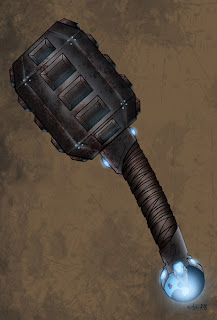 Here is my version of a mace. Small and compact and yet so very deadly. This would be a light weapon as the head of the mace would just be pure metal. So it would really hurt to get hit in the head with one of these. 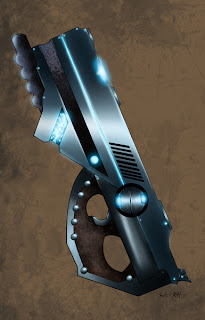 This is my mini rail gun. I was just trying to create something that had a nice look too it but still be a powerful looking weapon. It is very shinny. I don't know if that needs to change or not but for right now it is going to have to do. 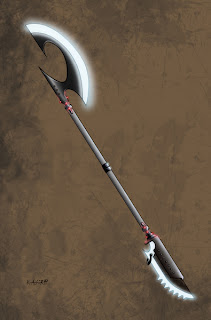 This is a weapon for an NPC character in the game. He is known as Shadow. he is a ninja but not he way you would think. I am not going to tell you anything beyond that because I want you to follow the story. But, as for this weapon it splits in half to allow for double hand fighting. 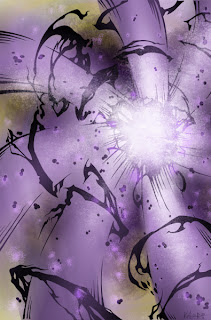 This is the Vortex card. This card game me some problems because I din't know how to get the effect that I was looking for. So there were a lot of different installments of what this card looked like and I think that this one captures what I wanted it to be. It looks as though things are twirling and being sucked in.

There you go. Hope you like them.
Well let me know what your thoughts are.
See you next time
Kaiser.