What happened to the Monday Meeting posts?

Here is something completely different. Dark Legacy: The Rising was released in the New York Comic Con in November. Since then well nothing much has happened in terms of marketing or promotion because I was waiting until the new year. Starting in January you will be seeing a lot more post on Facebook, Twitter (@ksp_darklegacy) and the this blog about Dark Legacy. I am supper excited about this product. I can't wait to go on tour with it. The first big convention Dark Legacy will be at is Megacon in Orlando Florida March 14-16th. It is going to be fantastic. I have a lot of exclusives that I am going to be giving away. If you can make it to Florida come find me. I will be battling with Magic the Gathering in the gaming section.

Even though I haven't don't any true marketing and promotion, some of my students got wind of this game and bought some of the decks and started playing. Since that day it has started to spread like wildfire. I was very ecstatic to see people playing the game even though I didn't set it up. It made me think that I have something good going on here. Because of that I decided to host the first ever Dark Legacy Tournament.

It was very short notice but there were 11 participates at this Tournament and a few other people told me that they would have been there but because of the short notice they missed it. Oh well I will have to get them on the next one. But, even though it was short notice the tournament lasted for eight hours. It was a fantastic event. I would like to thank everyone who participated in this event. For those of you who were wondering if there were prizes for the top players...yes there were. Some pretty good ones if I might add. If you want to know what they were come to the next tournament and ask me. I will be more than happy to tell you.

How about some pictures. 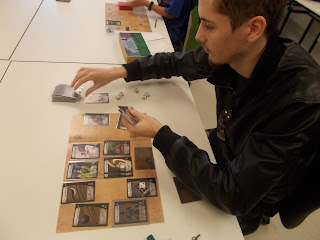 Evan concentrating in his first battle in the Dark Legacy Tournament. 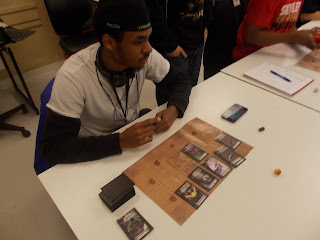 Here is Damian scouting out the competition. 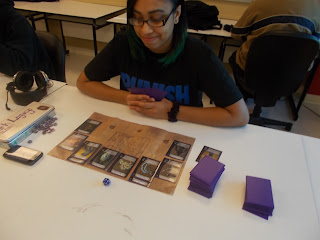 Akasha was the only girl to be at the tournament and she was kick a lot of butt there. 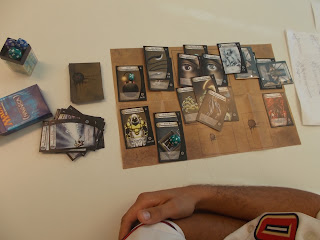 A well stocked playing mat. He might actually have the advantage. Wait a minute is that a Magic the Gathering box. Could this a convert from Magic to Dark Legacy? Let's hope so. 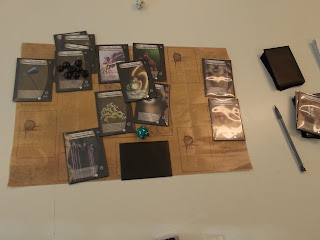 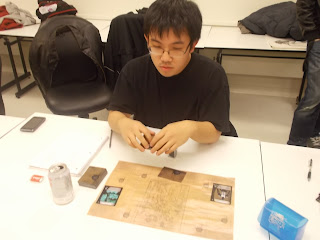 Dennis at the beginning of one of his battles. Do you think he is going to win. 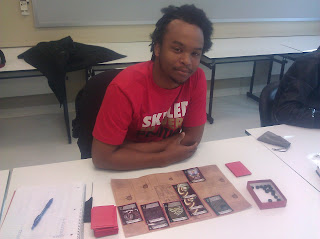 Leo was the first person to win the this tournament and he did it in only 30 minutes. That is 15 minutes shorter an average game of Dark Legacy. These three players were in the running for first place. 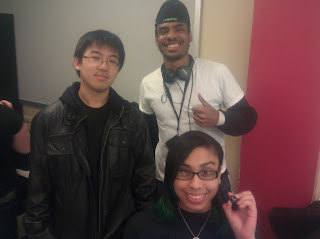 These three players were in the running for third place. 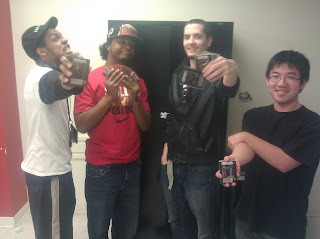 Here are the first through fourth place winners of the first ever Dark Legacy Tournament. 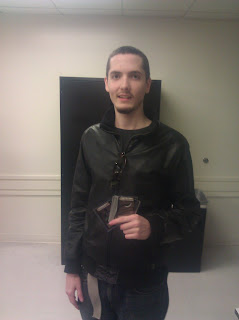 The winner of the tournament was Evan Copland. He then wanted to play me. We played, I won. Just goes to show you...don't mess the the creator of the game. 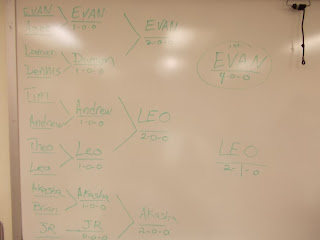 The bracket towards first place. 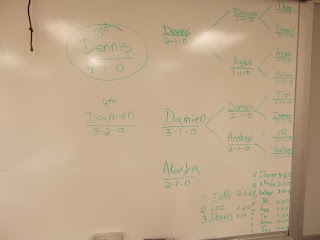 The bracket towards third place. 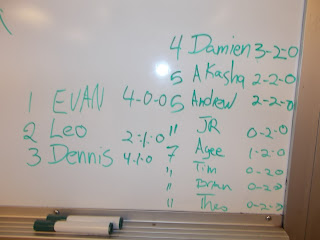 This is the current official standing of players in the Dark Legacy universe. Hopefully soon we will have new people who are going to be on this board.
﻿


So there you go. A nice little update on the newest creation from Kaiser Studio Productions. Only time will tell where we go from here. Thank you for being part of the journey. See you in 2013 or maybe sooner. Either way have a Merry Christmas and a Happy New Year.
Kaiser﻿
Posted by Bryan "Kaiser" Tillman at 2:39 PM